A few months ago, Ms. Audrey Ashiali Oduor, a Mount Kenya University (MKU) alumnus, was appointed a judge in a voices competition at Arabian Pearl Gulf School in Bahrain. The competition focused on speech presentation, drama monologues and choral verses.

Audrey, 26, a teacher at Arabian Pearln Gulf School is a holder of a Bachelor of Education, Arts (English and Literature) degree from MKU (2014). But she is also talented in creative arts, film and theatre. That is how she was selected to judge the school’s voices competition.

Before she got the opportunity to teach in Bahrain, Audrey taught at Aga Khan Academy Senior School, Nairobi. With talent and passion in drama, she was popular at MKU Thika where she studied, as she would perform in various activities during student orientation sessions to welcome ‘freshers’.

“I recall my close allies then: Mr Stephen Opanda, Mr. Vincent Muli (who later served as Minister for Entertainment in 2016 MKU Students Governing Council) and Winnie Dwalloh, among others. We used to prepare different skits within a couple of minutes,” she reminisces. 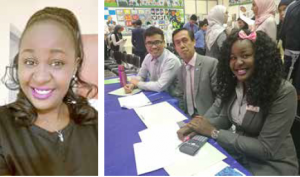 While at MKU, Audrey acted in two plays, representing the University to national level. This was in 2012 and 2013. The plays were titled, “The Dossier” and “The Snare”. They were scripted and directed by Mr William Luta Opanda, an MKU alumnus of the 2009 class and now a staff member at the University’s Institute of Film and Creative Arts.

Audrey scooped two awards: Best Actress in Aberdare region, and the most promising actress nationally at the 2013 national festival. While on attachment at Chania Boys Thika, she participated in music festivals  and went all the way to national level.

That was in August 2014. She has also scripted and acted in films, among them “Life Blood MKU”, directed by Mr Ngahu, and “My heart will go on” by Mr Antony Njagi. She is the second assistant director in a drama series, “Co-wives”, which is yet to be released. The series is by Purpose Media Services.

“What drives me is the urge to be somebody. I am a go-getter and I strive to achieve my targets…. My mum has been my great source of inspiration. She encourages me a lot,” Audrey says. She adds: “I am always proud of my university, MKU, for nurturing me and giving me the platform to showcase my talent. I chose MKU after I researched and found it to be a serious university that nurtures students’ talents.”