MKU had a pass rate of 96 per cent, the second highest 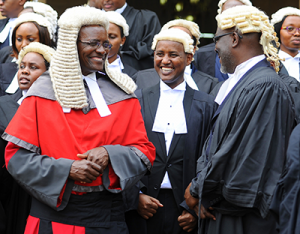 Learners who undertake their LLB studies at the university go on to perform well in the Kenya School of Law (KSL) Bar examinations, the task force established.

TFLSR presented its report at a conference held January 14-18 in Mombasa under the theme, A Legal Profession for the 21st Century.

The Council of Legal Education (CLE) and Office of the Attorney General and Department of Justice organised the meeting for stakeholders to give their input and validate the report.

The task force was appointed by then Attorney-General Prof Githu Muigai on 26 September 2016, and is chaired by Senior Counsel Fred Ojiambo.

The report found that a high percentage of MKU students who sit the Bar exams pass, compared to those from other universities. MKU had a pass rate of 96 per cent, the second highest after Jomo Kenyatta University of Agriculture and Technology (JKUAT’s) and African Nazarene University tied at 98 per cent pass rate.

Bar examinations are mandatory for law graduates who want to join the Bar in the country.