Mr. Donatus Njoroge, MKU school of Pure and applied sciences faculty member has emerged amongst the best 25 innovators from East Africa, in a Post-harvest competition that was held in Tanzania presided over by Christophe Bazivamo, Deputy Secretary General,East Africa community(EAC) as the chief guest, Lisa walker from USAID, James Shikwati Director Inter-region Economic Network(IREN) among other guests. 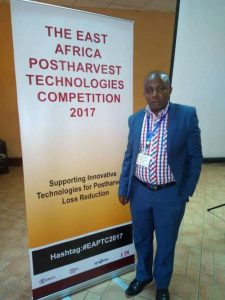 His project “Use of Ocimum species to protect stored grains against post-harvest pests” had been shortlisted from an initial pool of 250 from five countries, Rwanda, Kenya, Uganda, Burundi and Tanzania. His project will now proceed for pitching at the East Africa Post-Harvest fair set for May, 2017 in Nairobi, Kenya.

The East Africa Postharvest Technologies Competition 2017 (EAPTC-2017) had been organized by Inter-region Economic Network in conjuction with USAID, East africa trade and investment hub and Syngenta. Its aims is to identify scalable post-harvest technologies in East Africa for dissemination. The EAPTC-2017 selected top 50 scalable technologies from successful entries and offered them accelerated training on scaling up and pitching. The innovations were later presented to a team of judges.

The twenty five outstanding innovators from East Africa will be given an opportunity to showcase and pitch to potential partners (development partners, donors, Governments, farmers/traders associations and investors) in a special session during the upcoming East Africa Postharvest Technologies Fair set for May 2017.