The first lot of government sponsored students to private universities graduated on Friday, marking completion of their four-year educational journey.

The 1,127 graduates who joined the institution in 2016 are part of the pioneer 12,000 students ever sponsored by the government to pursue studies in private universities.

This was part of a government plan to reduce congestion in public universities.

Wanderi spoke during the 17th graduation ceremony of the institution where 5,169 were conferred with degrees and certificates.

“Mount Kenya University is graduating its first cohort of government-sponsored students who were admitted in the year 2016 during this graduation ceremony, having empowered them to serve as market leaders in their respective fields,” Wanderi said.

John Struthers, the institution’s chancellor, called on the graduates to apply the skills acquired to solve social and economic problems.

Struthers said due to the high demand for university education in Africa, the graduates would need to sharpen their skill so as to have an edge in the job market. 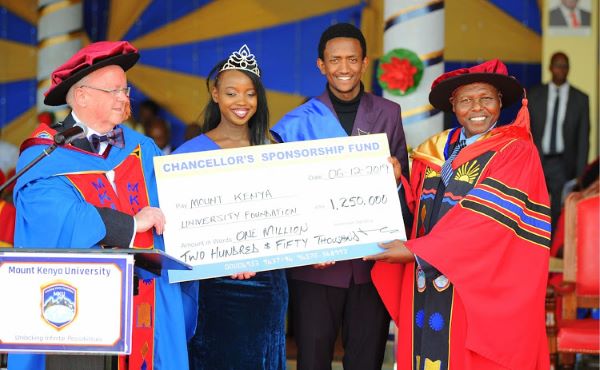 He called upon the graduates to develop an entrepreneurial mindset for self-employment.
“I want to remind you that Africa is increasingly growing in the percentage of university education graduates. It is your responsibility to continue sharpening your competencies and seeking value addition to have a market advantage,” Struthers said.

The institution through its charity wing, Mount Kenya Foundation, has established an endowment fund to support needy students.

The fund targets to raise Sh100 million in two years.  “I am pleased to announce that Mount Kenya University chancellor Prof John Struthers has already supported this fund with a donation of Sh1.25 million. The needy students can now apply for the chancellor’s scholarship fund,” the VC said.

The institution has partnered with Telkom Kenya to enhance digital learning.
Article by:https://www.the-star.co.ke/counties/central/2019-12-09-first-cohort-of-government-sponsored-students-graduate-from-mku/